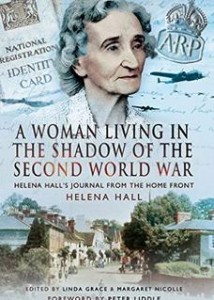 The published journal starts on 1st January 1940 and ends on 9th May 1945, the day after VE Day. Sadly, the first two volumes, which covered the weeks from the outbreak of war on 3rd September 1939 are lost. The entries are full of personal and local events, such as distribution of gas masks, food and fuel rationing, collecting gifts for overseas personnel, comings and goings of military personnel, Air Raid Patrol service, volunteering in canteens etc. There are details about recycling, cinema films, radio broadcasts, vehicle restrictions on the village green – so many aspects of the war that are little known. Entries about visits to London and Brighton give a wider view. She also includes extracts from newspaper reports giving news of UK, Europe, North Africa and further afield. A small selection of black and white photos illustrate the village, people, events, cartoons and documents.

Overall, a fascinating insight into life on the Home Front.